The Cowboy is rather serious by nature.  Not that he doesn't have a sense of humor, he married me and I'm always giggling about something.  But he's certainly no comedian.
I told him soon after we were married that he wasn't funny, he was fun to be with. Two totally different things.
He took great offense to this and has ever since made considerable effort to be considered funny.  Sorry it's just not his nature. He's not a joke teller, he doesn't act goofy and would much prefer to watch a western over a comedy show any day. It's just the way he's made. And I like that about him. So because of his "considerable effort" he actually can be quite funny now and then.  But as our girls and I agree, it's so much funnier watching him TRY to be funny.  So whenever he does actually do or say something funny he immediately follows it up with "See? I'm funny" to which we immediately reply "No but you are fun to be with".
So recently he and I were watching "The Cowboys" on TV.  I absolutely love this movie. 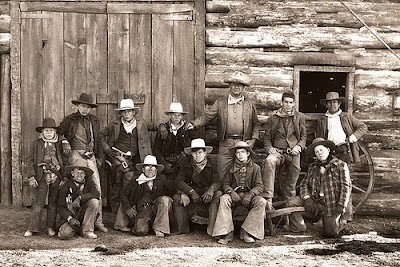 Notice the VERY young John Carradine in the back row right of John Wayne?  Anyway, I have always just loved this movie, sad but good.  (I was going to insert here the YouTube clip of when he makes it so the one little boy gets over his stutter, it's sad but sweet.  But it does have some language in it and since my mother reads this blog I thought I would forego that part.) 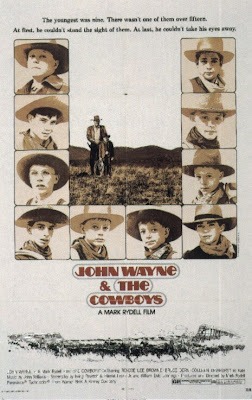 So as we sat there watching the movie it came to the part early on where he goes into the school house to see if any of the young boys look capable enough for a trail ride.  When he enters he informs the teacher that he wants to speak with the boys before school lets out.  She asks if he would like to speak to the "young ladies" and he replies "No" to which she says, (and I quote),
"Well, we will acknowledge that it's a man's world and leave you to your business."
I found this statement so archaic and funny. I looked over at the Cowboy and before I could say a word he slightly nodded his head and said "And don't you forget it".
Ok, that made me absolutely HOWL with laughter.  I had tears in my eyes I was laughing so hard.
It was hilarious!! He then smiled and said on cue "See? I'm funny"
I wiped the tears from my eyes and said, "No but you are definitely improving. Keep up the good work"
He didn't laugh.