The beginning of a Studio

Well yesterday was a lovely day.  Long but productive and fun.  We set out early as we had to drop of "Rico Suave" the gorgeous little grandson to his home after spending a night with us, but we were on the road shortly after 7 am. 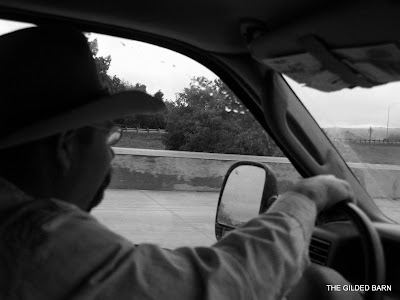 The view is not the greatest from Paso Robles to Palo Alto but we had a nice time just chatting and enjoying being alone.  We stopped part way  at a McDonalds for some coffee and something to eat.  I'm not a huge fan of McDonalds in fact most fast food places scare me as I know it's some of the most chemically produced food out there, but it was on the way, cheap and the morning was so nice I didn't want to start out the day with having to drive all over to find something else.  So Mc Chemicals it was.
As we sat there next to each other sipping our coffee and eating a bite I said how it was too bad that our middle daughter and her boyfriend couldn't make the trip with us as planned.  The Cowboy said "yeah, but it's really kinda nice that it's just the two of us today.  I'm enjoying just being with you today".  I was nibbling on my pre packaged, high cholesterol, high fat, chemically produced breakfast that tasted remarkably like the most delicious hash browns I've ever eaten and suddenly said "Oh! That reminds me, there's the most interesting video on Youtube about the non decomposing hamburgers from Mc Donalds!"  The Cowboy said, "What made you think of that?"  I said, "Well, we've been together 26 years and we still like hanging out together so nothing much has changed.  I'll tell you about the video when we get in the car after we eat."
The Cowboy said "Thanks, I think"
It really is interesting and it certainly makes you think twice about what they put into their food.
I told him all about the video.  He agreed it was gross and then said, "Maybe we should have gotten some hamburgers in case we don't have time to stop later at least we know they won't go bad". 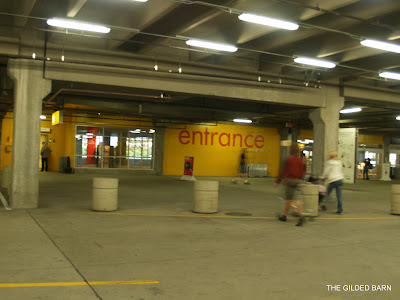 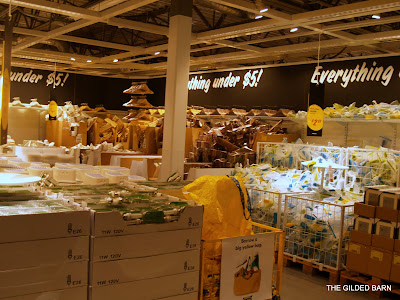 The land of plenty.  Seriously! Everything 5 bucks! 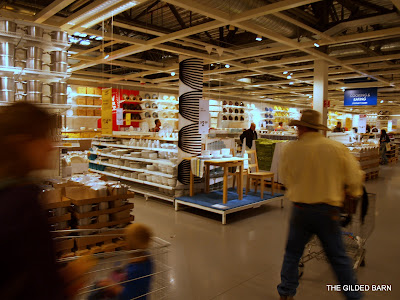 Even though I had strict instructions that this was NOT a buying trip for dishes or candles the Cowboy heads right over to the all white dishes to look around.  What kind of message is that? What, is he testing me to see if I can pass it up even if he hangs out there awhile? I holler at him "Hey what are you doing?! I thought no white dishes or candles?"  Then I hear myself and realize it must be the Egg Mc Muffin talking because I would NEVER say such a thing.  The Cowboy looks at me with a completely startled expression and I say, "Wow, I can't believe I just said that.  I must really be on the road to recovery from my white dish addiction."  He smirked and said, "Don't worry I'm sure there will be a relapse somewhere along the way" 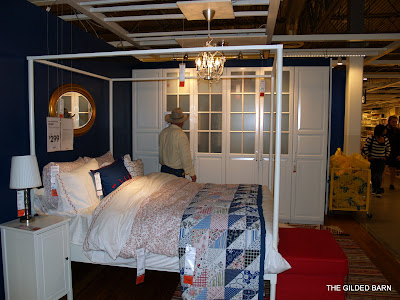 I just love the way they set up actual rooms to look at.  We really liked this closet system for me as I'm still using free standing armoires for now.  I told him I loved it but would want to have door made as these are too plain for me. He mumbled something about the doors would end up costing more than the whole unit but at least it got us moving along again. 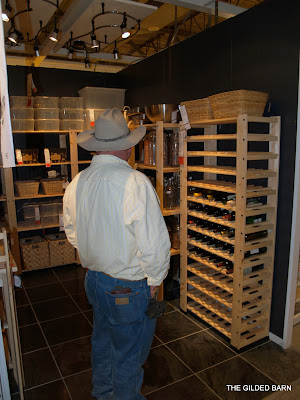 And here's the shelving we were looking for.  I love this stuff.  Looks as good as the Williams Sonoma stuff but for a whole lot less.  We looked at the tags to see how the price had changed since we had last bought some almost 10 years ago, (not that much really) and we were on our way to the warehouse. 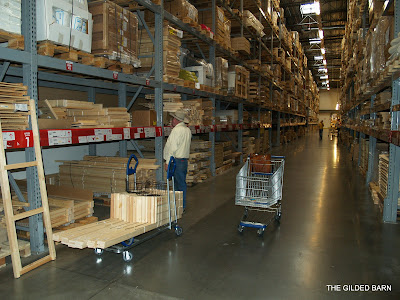 Aisle 1 bin 79.  It was a pretty quiet place until we showed up and began the big debate of how many pieces to buy and what we needed to combine with what we had and how we were going to put it together after we cut some of it up.  (We just can't seem to do things the easy way)  I have to say, after a while we had both drawn diagrams on scrap paper of what we thought we were doing and what we needed and we were both pretty frustrated and when I realized the Cowboy was about to blow a gasket I decided I'd best be nice to the person whose help I really needed so I just said "ok, get whatever you think we need".
I'm not sure why the but the whole thing cracked me up as I turned around so I grabbed my camera and said "Give me that angry look again"
"No, you're going to make fun of me"
"Noooo, I'm going to make fun of both of us  (sort of, not really) Come on" 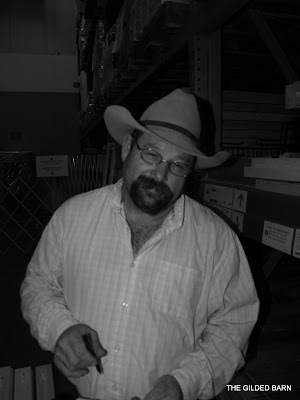 I said "Wait, where's the angry, grouch that was talking to me a minute ago?"
he says, "I'm not Mr. Potato Head so I didn't pack my angry eyes"
Hilarious!  He has cousins who are actors in both film and tv and this is best he could do? Oh well, at least he's not wanting to throw everything back on the rack and leave empty handed. 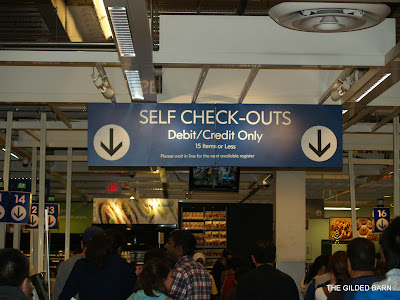 Next are the huge checkout lines.  We waited in line for what seemed like forever only to get to the register and find out that we should have read the giant sign above our heads that said, "Debit/Credit Only".  Yeah us two knuckleheads had only cash. So we navigated our way to another line and started the waiting process again.  The Cowboy mumbled something about wishing he had one of those non decomposing hamburgers right about now. 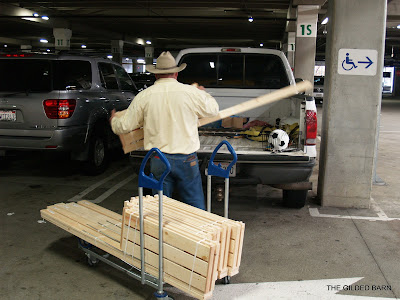 Finally, out of the building and headed home and I might add without one white dish or one box of white candles. (Seriously they have the best candles and are super cheap but I currently have 3 huge boxes at home stashed away) 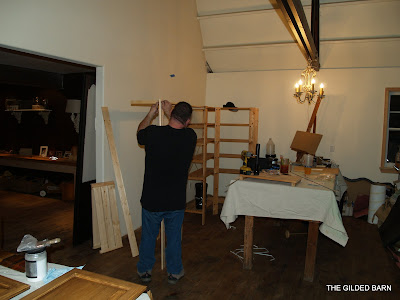 We worked for hours, moving, arranging, discussing.  But it's coming together.  At one point I said I'm so tired and it's almost nine we should stop.  He agreed and then said, "Wait! We forgot to set these clocks back in here it's only eight. (I internally groan) "Let's just put a little more together and then stop."  Stupid daylight savings time! 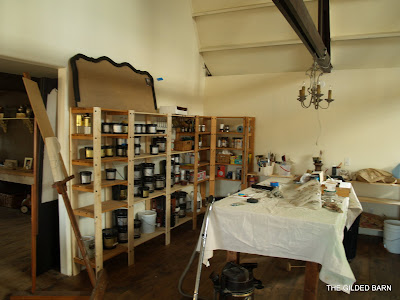 But it's starting to look better already.  We'll work more on it this week and hopefully have it wrapped up by the weekend but now it's time to sit down and watch the Amazing Race and off to bed.

It's no secret that I have been in desperate need of studio space.  Up to this point I've been using a corner section of the kitchen/dining area as a place to work.  The problem with this is that I don't have room to keep all my stuff (and I have a lot of stuff!) in the house so a good part of it is kept in a storage container on the property.  So what happens is when I'm working at home I end up spending a lot of time looking for things because I can't ever seem to remember if they are inside or outside.  Then I run back and forth to the container digging around for what I need usually to end up finding it back inside the house.
Now I don't know how many of you are familiar with the large storage containers used on freight trains, but the Cowboy is addicted to them!  I agree they are mouse and water proof but they are ugly and come with an oily odor that I can't stand.  Not to mention the doors are extremely heavy and hard to open so I usually end up leaving them slightly open, just pushing them closed enough to look closed which makes the Cowboy furious because "it defeats the purpose".  yeah, yeah, I still hate the darn things.
Well this last weekend I was getting ready for a large kitchen cabinet job and so I enlisted the Cowboy to help me organize a little bit and bring in a big work table that used to be in Jamesy's shop when I was growing up.  As I'm emptying out things from the container I'm saying things like, "man am I glad to not have to smell this place again" Big eye roll from the Cowboy.  "Ugh, I hate this thing!" Another big eye roll. "Good God if I never have to struggle with those God awful doors and hear that hideous creaking sound ever again I will be very happy"  An even bigger eye roll accompanied with a scowl.  At this point find some mouse droppings in some of my things and say "Seriously?! Mice have been in my stuff?! Great, just great!"
The Cowboy sweetly says, "Um yeah when you don't close the doors you might as well hang a sign up saying come on in and poop all over"
My turn to give a huge eye roll.
So we get things inside.  The cowboy removed the old top from the table and laid down a new piece of wood and it's just perfect.  But amidst all the madness, the Cowboy turns to me and says, "You know I don't mind your studio being in the house I just don't like to look at a mess.  So why don't we go to IKEA, (he now has my full and undivided attention at this point), and get some of those shelves we have in the pantry and I can set you up with storage for everything and then you can hang curtains on the front and I'll cut some of them down  and you can have a small counter space and use some of your old silver to hold your brushes and stuff......."
As I stood there with my jaw hanging I realized that he had just laid out the perfect workspace. 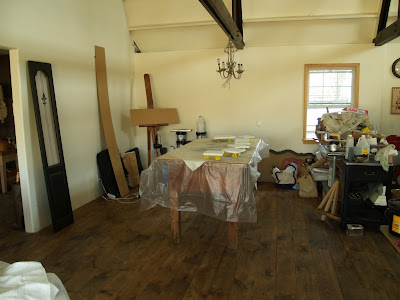 Sooooo much better than what I'm looking at now. 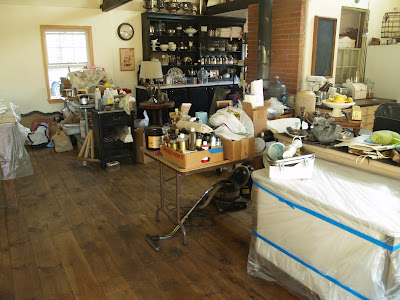 With everything scattered from stem to stern. 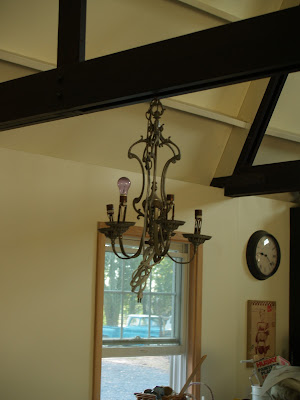 He even dug out this old chandelier that's been sitting around waiting for a good home and will wire it up this weekend over my main worktable.
So I've had to wait all week but Sunday, IKEA here we come!! Whoooooo Hooooooo!
I'll have pictures of the space in progress next week.