Is there a 12 step program for people like me? 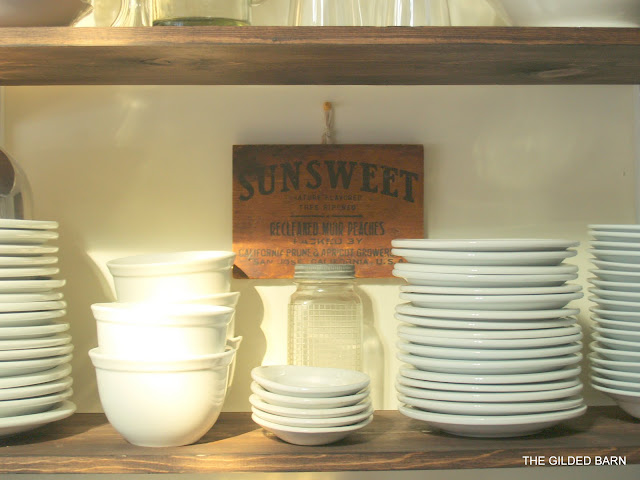 And if there is do I want it?
I am on the 2nd round of unpacking and can't believe the amount of stuff I have accumulated! 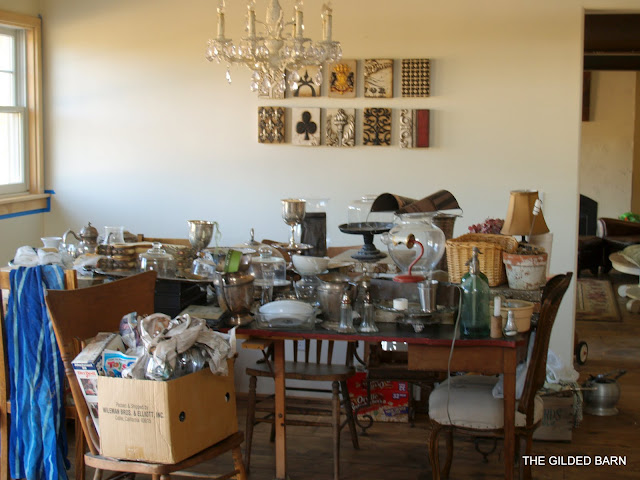 Honestly, this table was empty after the last time I posted! The box is full of wineglasses, I guess you can't have too many of those.  I kept digging out silver, ironstone, linens, cookbooks, you name it I kept pulling it out of the box.  At one point I said "Good grief this is bordering on obnoxious! Six silver Champagne buckets is ridiculous! I probably should get rid of some, but then again they make great vases"  To which my daughter Cait exclaimed, "Mom you're just an elegant hoarder!"  We had quite a laugh at the thought of me being on TLC's Hoarders "The Elegant Series". 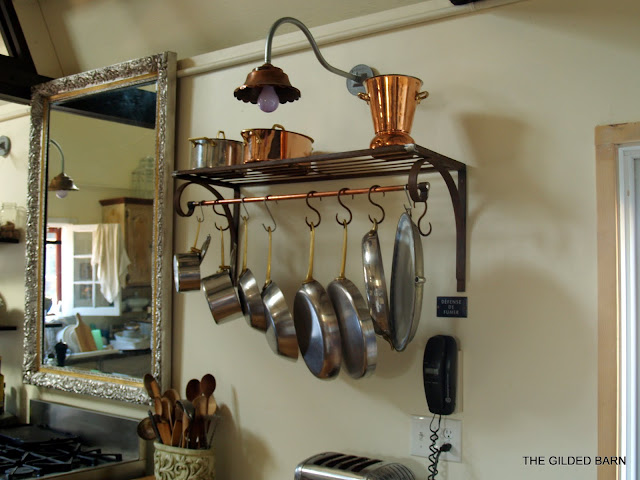 The Cowboy hung up my pot rack.  Oh how I have missed my pans!  He made this for me 15 years ago and when he went to hang it it was three inches short of hitting the studs and because of the weight it HAD to be set into the studs.  So off he went, that man of mine, and cut, added a new longer copper pipe and rewelded it to fit the spot.  What a guy!
Are any of you wondering what I was thinking putting the phone right there under where the pans would hang? I am.  Orgionally it was set to be on the other side of the french doors but I thought it would be handier to have it closer to the kitchen so I had the phone guy move it to the other side of the doors.  Now it makes me crazy!  What was I thinking?  Oh well we'll just move it back at a later time. 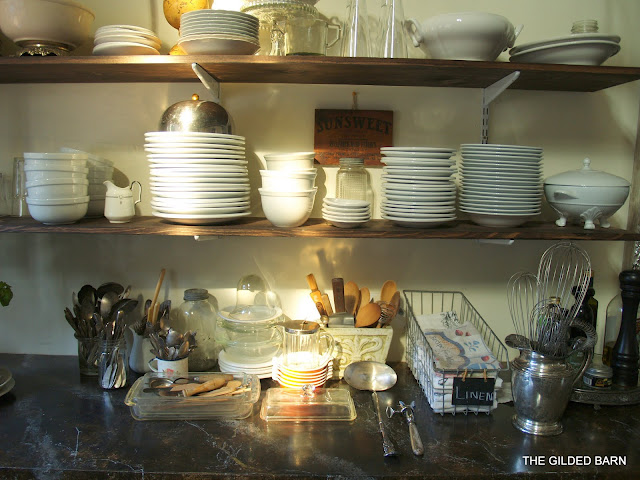 Two shelves above the counter hold our everyday dishes.  Still trying to figure out where to put the stuff on the counter. 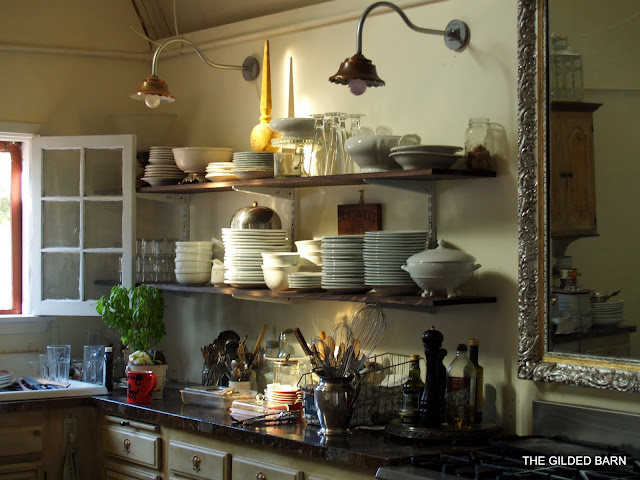 I'm not really happy with the arrangement yet, it feels a  little forced but I'll keep working things around until they fit without feeling squished. 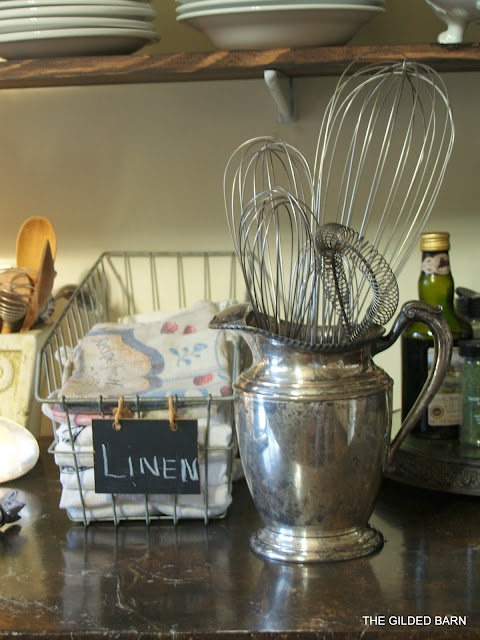 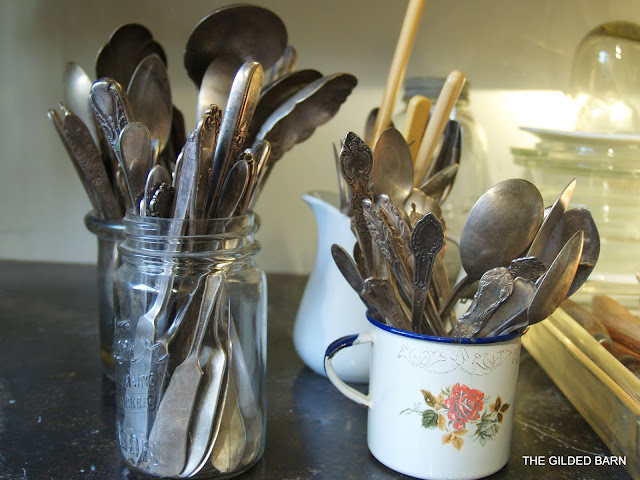 Is it possible to have too much silver? 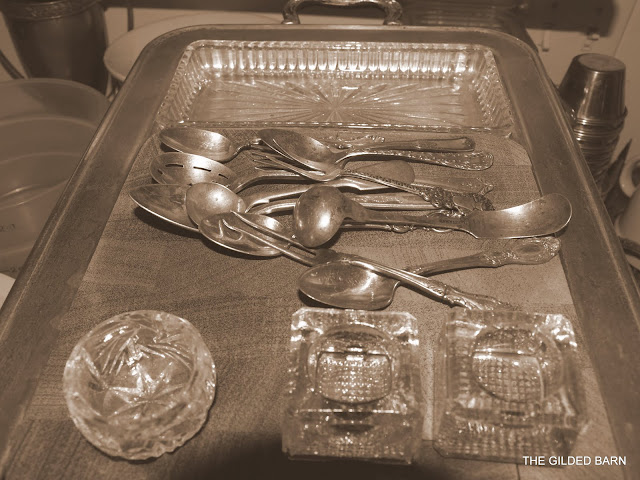 This little silver tray with the cut glass dish and wood cutting board inset was a gift from my mom.  She showed up one day after we moved in thrilled that she found it at a garage sale just around the corner from my house for a whopping fifty cents!!  The salt cellars where my great gramma's.  I just love all the little tiny spoons and pickle forks! 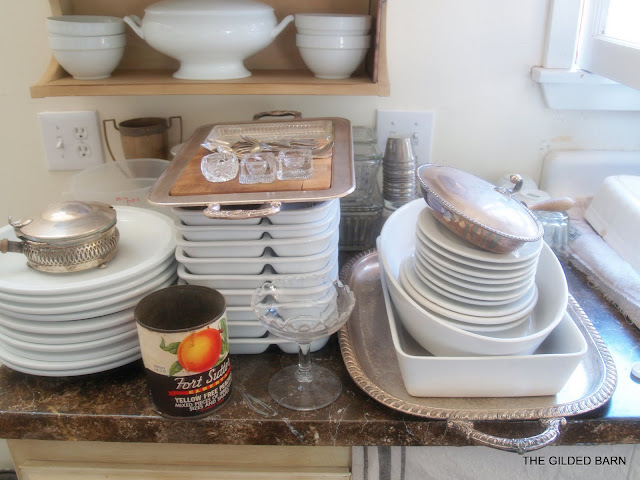 Ceramic TV Dinner trays stacked up in the center, Love these!  Wonderful for B-B-Q's, you get the divided plate but classed up a little bit. 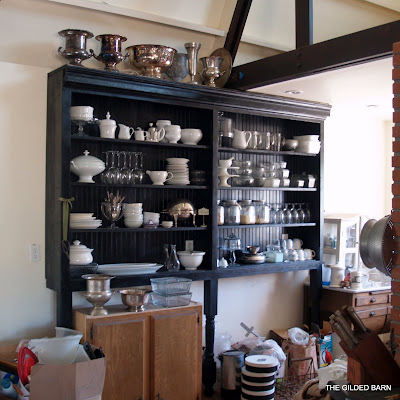 The bookcase is already full with ironstone and silver.  Some good friends are remodeling their kitchen and so the Cowboy picked up their old oak cabinets.  Some will be used for kitchen upstairs in Caitie's small kitchenette but the uppers will be perfect for making this into a large "Hutch".  The Cowboy said he will remove the post, add the cabinets and put them on feet and then we can paint it black to match and it will look like an old hutch.  I wasn't sure if the tears in my eyes were because my man is so creative or that I'm just getting more storage.
Round three comin' up.

Well today after 4 years, 4 months and 1 day we finally passed our final inspection and this barn is now recognized through the County as an approved single family dwelling. (insert fireworks here) I can't believe we did it.
Yesterday morning the Cowboy and I went out to his family's ranch (where a lot of our stuff has been in storage) and loaded up a ton of stuff.  Mostly kitchen stuff, that's what I've missed the most.  So today I have been unpacking, washing, drying and sorting.  I have to admit the mice had a lot of fun with my stuff.  Nothing ruined.  Really good stuff was packed and sealed but some of the dishes, well I'm a little shocked at to where those guys can get to when they want. 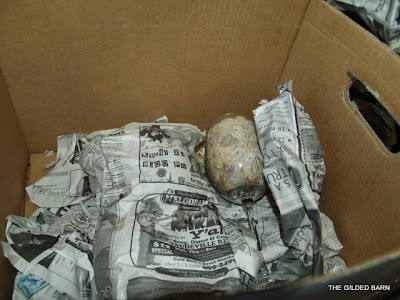 In the bottom of one box I unwrapped this wine glass to find it stuffed full. 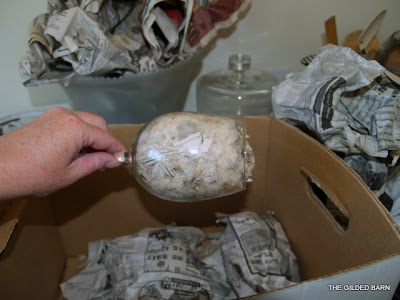 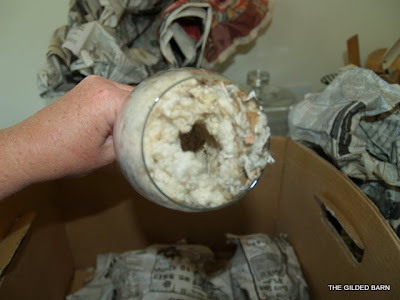 Some mouse had made a perfect little home for a few winters.
I have to admit I didn't realize just how much stuff I have until I started getting it all out.  And I regret to say I'm only about half way through! Most things I have service for 8 and some for 12.  Although I do have a couple of sets of silver to serve 20 and one set of plates to serve up to 40.  I know, crazy. Even though this house is almost double than our last I can honestly say I'm wondering where it's all going to go.   My daughter came in and as I was saying that I think I need to have a garage sale and unload some of this stuff she reminded me that we haven't entertained in 4 years and when I do I'll wish I had it all.  Thank goodness for the voice of reason. 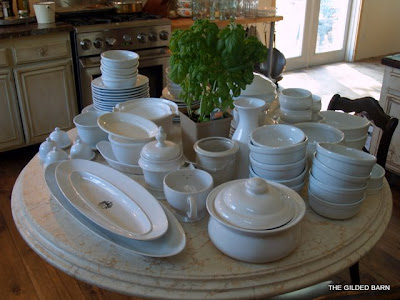 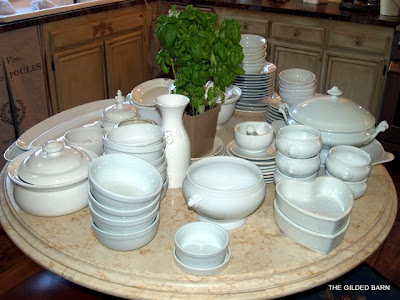 I love vintage stuff but when I buy new stuff I usually buy at least two of something (when setting a large table I like to have the same dishes at each end so food doesn't have to be passed all the way around).  Looking at the pictures doesn't look like too much.  I should have taken a picture of the whole kitchen, it was covered! 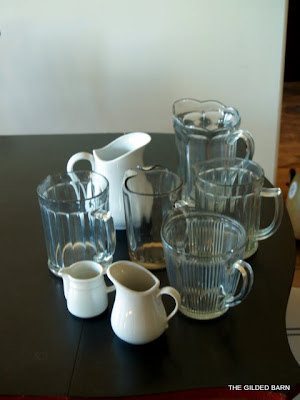 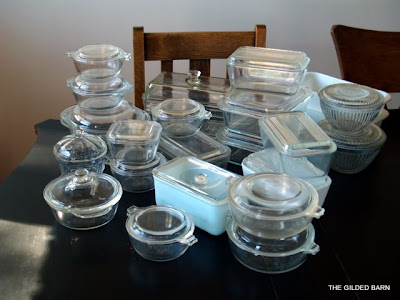 I also love vintage Pyrex for food storage.  I really don't like tupperware or plastic dishes in the fridge so I started collecting this stuff years ago.  And now that they (whoever "they" are) have figured that it's toxic to microwave in plastic containers I'm really happy to have so much of this.  I have a lot more in storage but I have to say I do like that I have a dish for every size leftover. 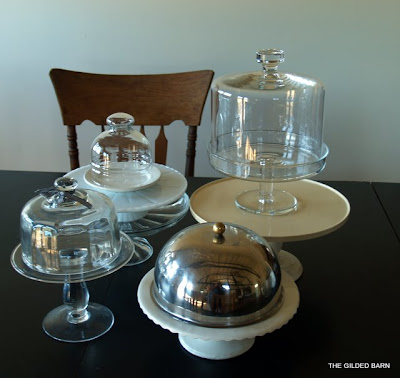 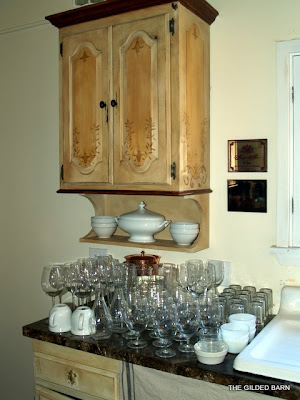 A few glasses and some more white dishes. 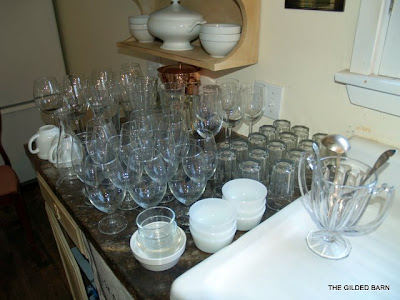 Boy did I miss these wine glasses! 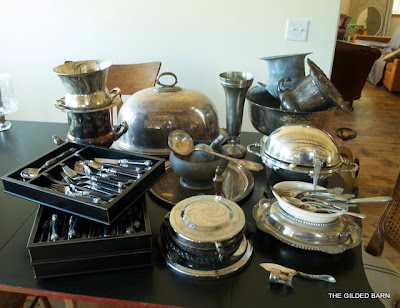 And a little silver!  Oh how I have missed the silver!! Love, love, love vintage silver!!  The waffle maker in the front was my grandmothers.  It was a wedding present in 1934 and it still works like a dream. 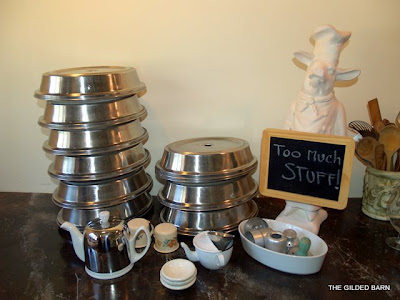 I also love hotel silver or anything for serving.  I found these large plate covers for a quarter a piece at a swapmeet.  Came home and found that I had vintage ironstone plates that fit them exactly! What are the chances? 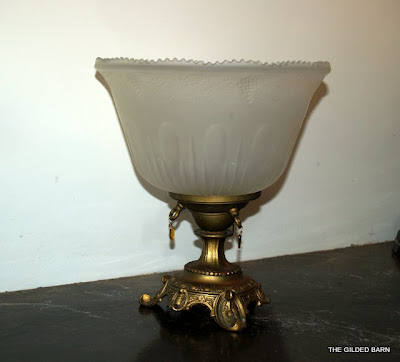 This is one of my favorite pieces.  I found the glass bowl at Goodwill for 2 dollars.  Then later I found this lamp base and the ceiling attachment for a chandelier and put them together and hung beads from the rings where the chains should attach and Voila!  The perfect stand for this bowl.  I have used this as a large ice bucket, as a salad bowl and to hold towels.  I actually found another bowl a year ago at the swapmeet and am now looking for more parts to make another base then I'll have two. 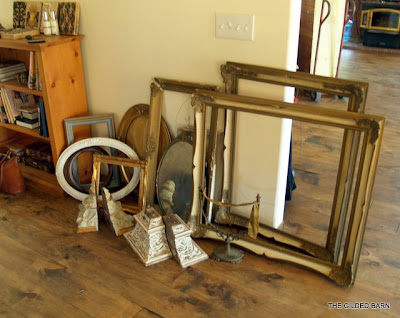 We also brought home some miscellaneous frames, mirrors and brackets.  As I was furiously loading things into the truck the Cowboy kept saying "Don't take anything unless you know where it's going to go".  I keep telling him that I have to have everything in the house so that I can see what I've got and figure out where everything is supposed to go.  He kept rolling his eyes but I just kept throwing stuff in as fast as I could.  When he said "No more, the trucks full"  I grabbed some more stuff and kept going.  He said "You know that's gotta sit on your lap and it could have a mouse in it".  I said "I don't care, if he's still in there when we get home he'll have to help wash and put away".  We made it home but the mice were gone.
It's been a busy day all by myself.

I believe it was the French Monk Dom Perignon who was given credit for the invention of the champagne cork.  Some say he stole the idea from the Spanish pilgrims who came to France with leather sacks filled with Cork.  Nonetheless it was Monsieur Perignon who did in fact come to the conclusion that in order for his Champagne bottles to maintain the essence of their lovely elixir they would need to be sealed with a cork along with a wire basket to ensure a firm hold.
When I found my beautiful kitchen sink on Craigslist, the Cowboy took one look and said, "Cool! It even has the opening for the spray nozzel".  I questioned that, (why I don't know as he's almost always right about this kind of stuff), I thought from the picture that it was some sort of metal tag or label of some sort.  But he was right.  When we picked it up, there it was a nice little hole right below the faucet.  Since the faucet I picked out did not require four openings I had this hole that I just kept looking at each day and trying to be careful not to let water run down into so that it would drop under the sink and get things wet.  The Cowboy will eventually make a tiny Iron and Copper crest for me that will plug it up but until then I just kept looking at it thinking, "Where can I get a cork that size?"  Then it hit me.  A Champagne cork should do the trick! 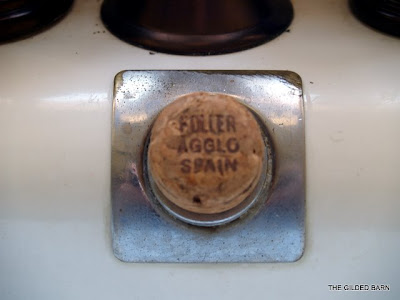 I actually have quite a few laying around as I do loves me champagne and I always throw the corks with their little baskets into a jar or drawer for whatever reason I don't know, but I do.  So after a little digging I found this one from Spain. (Only fitting for those purist who truly believe that the Spaniards invented the cork).  It fits like a glove! 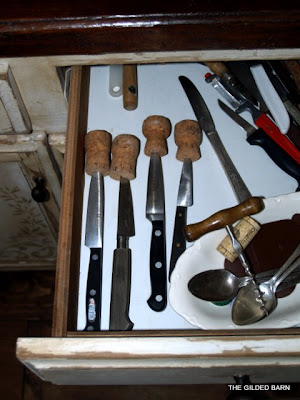 I also like to use corks to stab the tips of my knives into so when they lay in the drawer they don't mingle with each other and get dull.  When I bought two of the little paring knives in France 2 years ago that is how the cashier at dehillerin wrapped them for the trip home and I just decided to keep them that way.  Better they not get too homesick. 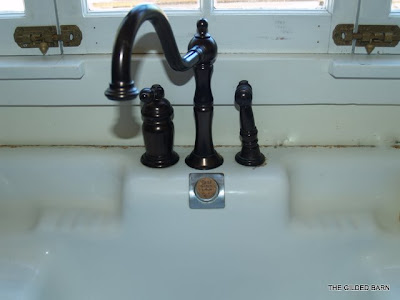 I'll love my little crest that the Cowboy will eventually bestow on this sweet farm sink but until then I am quite happy with my simple cork.
What do you do with Champagne corks?

I'm telling you I can't get enough of the "grain sacks"!  After my dining chairs were done I just kept looking around to see where else I could use one.  And, Voila! I found the perfect place for one even though it's temporary. 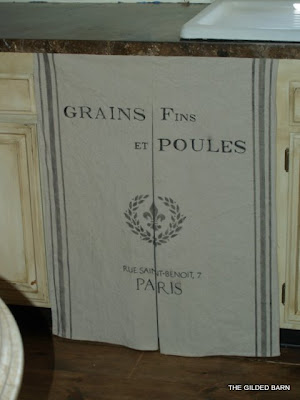 This is where our dishwasher will eventually go but until then I have a large ugly trash can sitting in the opening so to hide it I made a grain sack cover.  I made it split in the center to make it easy to get in and out.  It's just hung up under the counter with 3 upholstery tacks so when we do get the dishwasher it's a simple removal. 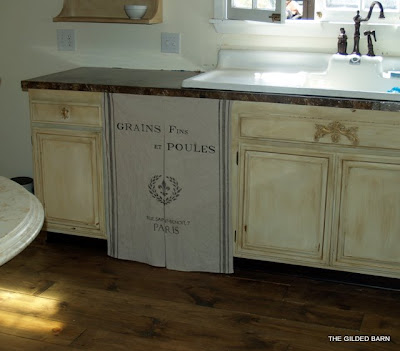 I mean, really, so simple and so cute!