So a lot of little stuff going on but not anything really to sing about so today I'm posting pictures of some things to come.

My stove did get here the other day so it is sitting in the kitchen area waiting to be hooked up. 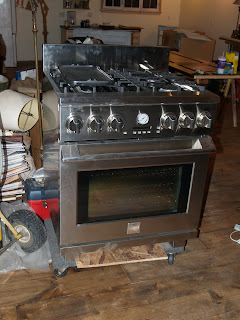 That will be nice to have a stove again.  Running back and forth to the fifth wheel trailer to use the stove is getting really, really old. 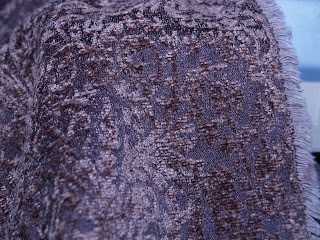 I made the curtain for the entry to the half bath sink room the other night.  I just love this fabric! A rich heavy chennile in cocoa brown and gold.  I put a Gold trim on the edge it really looks nice but I need a little help hanging it up.  I'll get to that this weekend. 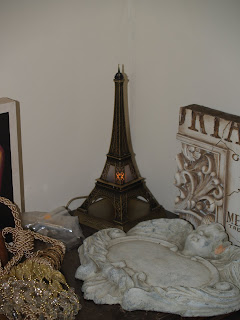 I bought this little light in Paris a couple of years ago and just love it.  The first time I was in Paris my sister in law, Alanna, bought one for a friend, we didn't think too much of it but then we went to her house and saw it lit up and couldn't believe how cute it was!  So on my last trip
Alanna asked for me to pick one up, no problem, they were all over the Rue de Rivoli.  But when I got there I couldn't find one anywhere!  I searched and searched and finally found two sitting on the floor in the corner of a little store.  I snatched them both up right away!  I just rewired this last week and it is so cute at night. 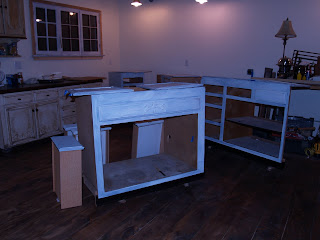 Kitchen Cabinets are coming out nicely. 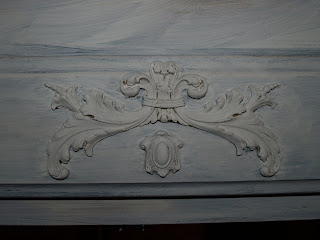 Here's a close up of the piece I attached to the front of the sink cabinet.  I will put the last coat of paint on them in just a few minutes, then some gold wax on the doors and some glaze and they'll be done, thank goodness. 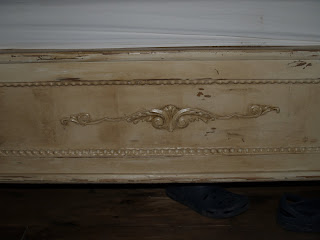 This is a picture of the footboard of my bed.  This is actually the "Thomas Bed" from Pottery Barn which I've had for 14 years.  Very cottage, sort of country.  I've always been pretty good about not making the house too feminine for the Cowboy but when we moved in here I knew I wanted our bedroom very French and luxurious.  So I was going to get rid of the bed but the Cowboy protested quite loudly, he loved the bed, big, heavy, sturdy, it had to stay.  He said, "Do what you want to it but don't replace it".  Do what I want to it??? Ok so now to make it look French.  I started with filling in all the grooves of the boards that were tongue and groove.  Then I found some fabulous huge christmas pearl strings so I bought them the day after Christmas at half off and then glued them into the paneled areas and filled them in with joint compound to make them look like they were carved in.  Then added on some architectural ornaments, a couple coats of off white paint, sand the dickens out of it and a little glaze and Voila!  A very pretty french bed. 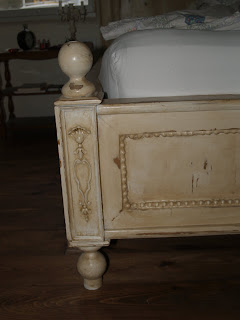 I am really happy with it and will post a picture of the whole thing after I get the duvet made. And I'll post the before and after pictures then too so you can see the difference.

All this work is fun but tiring.  My grandson is exhausted from just watching. 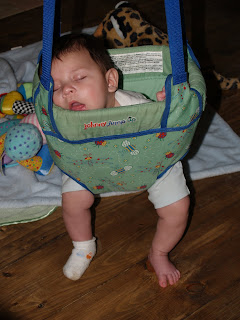